“And so, the UN System Staff College was born”

As the first Director of the United Nations System Staff College, I strongly share the view that its creation was an integral part of the important training and learning journey of the United Nations, a journey which has continued 20 years after the College’s establishment which we are now celebrating.

The dream of setting up a UN-wide training and learning institution existed long before I became aware of it in the late 1990s. But it was during a meeting then of some UN donor countries held at the Staff College Project (UNSCP) in Turin that I first came to learn of the idea. At that time UN donors faced a difficult financial climate, resources for the UN were tight and many Member States, concerned about UN relevance and effectiveness, were increasingly promoting meaningful reforms in their national policies on the UN.

The idea to promote a system-wide learning culture

That said, I was very much taken with the UNSCP’s aim to create a training and learning hub, building on the knowledge and expertise of the UN agencies, funds and programmes, and which could draw on best practice to promote a system-wide learning culture founded on common values and objectives. This inter-agency approach would  be focused on middle to senior-level staff and on the many and varied management activities carried out by UN staff in their different agencies and departments.

Institutional training was not a new thing: many UN Member States had run their own national management learning institutions for years. The UK, for example, had a renowned Civil Service College which trained UK civil servants in a wide range of management subjects. One obvious objective was the development of common management skills across the UK government in a coordinated way. The clear goal was increased effectiveness and efficiency through a common and accountable approach to the way civil servants in the UK worked.

The UNSCP seemed to me to be an excellent way to help promote such important management improvements in the UN itself. After all, UN reform was high on the agenda, donor funds were being reduced and the UK had even, although temporarily, left a UN agency, UNESCO, over serious worries about its effectiveness and value-for-money. Such concerns were growing among Member States.

It therefore seemed to be exactly the right time to launch a major management change initiative in the United Nations, not least as part of the UN’s own response to the reform challenges Member States were increasingly pushing.

When I was appointed Director of the UNSCP in 1998, the then UN Secretary-General, Kofi Annan, had already launched a series of UN reforms. It was my firm belief that the College could become a real instrument for change in the implementation of the Secretary-General’s reform process. But in order to play such a key role, a number of significant challenges lay ahead.

Firstly, the College still had the status of a “Project” and was administered by the International Training Centre of the ILO in Turin. Secondly, it had minimal financial and staff resources, minimal funding predictability and sustainability and, consequently, minimal contractual certainty and incentives for staff. Thirdly, the UN system itself – that is, its agencies – had yet to buy into the College, agree its core role and programmes, and help to ensure that it was adequately resourced.

My overriding and on-going task was thus to secure adequate and predictable funding for the College. As already noted, UN system agencies had yet to commit to the College’s proposed inter-agency function. Consequently, my initial resource mobilization activities focused on the main Member States who financed UN agencies. Few of them were aware of the Staff College and required a good deal of convincing before they agreed to contribute start-up funding! However, thanks to the generosity and understanding of both the Italian Government in Rome and my former Department in London, we were able to begin the process of creating a more secure financial foundation which would allow the College to operate effectively. Several Member States followed suit and even some contributions from the UK and Italian private sectors materialized. Resource mobilization thus became the main activity into which I put so much of my energies!

But funding, however critical, was only one of the challenges facing the Staff College Project. Limited resources meant limited staffing, yet skills were urgently required to develop the College’s role and programmes. Slowly but surely, we recruited a team, both from within and outside the UN system, which was able to design the College’s new agenda. This required a great deal of work, frequent and in-depth consultations with the College’s potential customers and collaborators. Paramount was the challenge of convincing UN agencies that the College could play a new and pivotal learning and training role in their on-going management activities which, hitherto, had been supported by their own individual, in-house training departments.

From project to system-wide institution

Above all was the unresolved but fundamental question of the College’s status, its potential position in the UN system, its administration and arrangements for creating a senior-level body to oversee the College, its budget and its activities. As always, limited and uncertain funding, the constant requirement for more specialist staff, made all those essential tasks difficult to manage. But, if the College was to survive, they had to be confronted. Over time they were and successfully as the College began to emerge from an uncertain future and gradually engaged and increased its number of clients across the UN system. In fact, we managed to double both the number of participants in the College’s learning programmes as well as its annual turnover. With increased recognition from UN stakeholders, the hitherto essential requirement for Member State funding fell away.

The most important development during my time in Turin was, undoubtedly, the College’s status change from a “Project” to a new, self-administered, system-wide institution. That vital process required a great effort, notably to produce an agreed statute to be submitted to the UN General Assembly for Member State consideration. The Staff College team and a number of key UN collaborators worked long and hard on producing a draft which was eventually submitted to the General Assembly.

Looking back on those game-changing events – notably the General Assembly’s approval in December 2000 of the establishment of the new UN System Staff College, and its further unanimous approval in July 2001 of the College’s all-important Statute, I can honestly say that those achievements, thanks to a small team which created a new, system-wide UN institution, constituted some special moments in my career.

A vital learning organization for the United Nations systemThe original Staff College idea conceived in the 1960s had survived and blossomed: the College was repositioning itself in the UN system with a new profile fully endorsed by the Member States. Thus began the next stage of its journey towards an institution the College has become 20 years later.

And so, the UN System Staff College was born. I was immensely proud to have been its first Director and to have helped to start the new institution as a catalyst for change across the UN system. Learning and Training are clearly fundamental to the success of any organization and to the development of its knowledge and skills base. Similarly, change, adaptation and innovation are vital components of organizations as they move forward, especially an organization as diverse and complex as the United Nations. When we were developing the College’s new profile one of our private sector collaborators came up with a slogan which we felt was so appropriate for organizations like the UN where change was going to be critical to their future survival:

To change we must learn,

To learn we must change.

I still believe the above applies. In fact, a willingness to change and to learn must be permanent and with it the willingness to share new ideas and to move forward with new approaches.

Thanks to the foresight, determination and hard work of the team which confronted the many challenges of transforming the original Staff College Project, the UNSSC has continued so successfully and developed into an organization which I believe is vitally important to the future relevance and effectiveness of the United Nations and its agencies.

I am proud to have been part of that journey and wish the College and its collaborators all the very best and every success for the next 20 years! 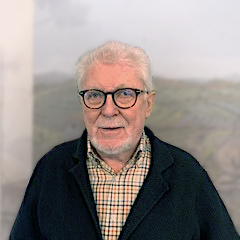