Yesterday we learned of the passing of Ado Vaher.  Ado was our dear friend and a big supporter of the College.  In 2009 he joined an advisory committee to design the long-awaited UNSSC UN Leaders Programme, and he continued to help us for the next three years. By then he had retired from UNICEF. Despite the norm to receive compensation for his time, he refused and supported the programme on a pro-bono basis.

We asked Ado to join the design committee for a number of reasons.  First, he had just retired as a senior staff with UNICEF, hence he was a good candidate to tell us what a leadership development programme for senior colleagues should look like.  As a straight shooter, he did not shy away from criticizing our thinking and always offered a better idea on what a solid leadership development programme should be.  Second, with his extensive network within the system, Ado was a walking directory of who’s who within the UN system.  Third, as a creative person, he offered out-of-the-box solutions which resulted in making the programme a fresh, unique and a fun learning journey for participants.

Kind, intelligent and a bon viveur

Ado was a towering figure who always was the tallest one in the pictures and never needed a microphone to talk to a large group.  He was the walking definition of a bon viveur who truly enjoyed retirement to its fullest.  Dividing his time between New York, Bangkok, and Toronto, it was not easy to track his whereabouts, but he always responded immediately when the call for help reached him.  Despite his distinguished careers with the Canadian government and then UNICEF, he took the job at hand very seriously, but never himself.  He was kind, intelligent, with a sharp and dry sense of humour who truly became one of our close colleagues, even though he only came to Turin a couple of times year as the faculty of the programme.

Within the UN Leaders programme Ado had multiple roles: 1) Faculty member; 2) the official photographer, and 3) the designated UNSSC unofficial mole to check the temperature of the programme by talking to the participants during the coffee breaks, lunches and dinners.  His feedback sessions became an integral part of our late night review meetings organized to assess daily progress and if needed, reshuffle the next day’s agenda.  These meetings never ended without Ado’s famous reality checks when we heard the truth and nothing but the truth.

So our dear friend, if you can hear us, just know that your beloved UN Leaders programme is now 13 years old and still going strong and your friends at the staff college will deeply miss you and your big smile. Rest in Peace Ado. 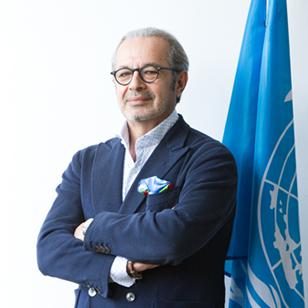